When I opened the door of the small inner city studio, I was greeted by a high ceilinged room with yoga mats in a circle and half a dozen welcoming faces. It was day one of an urban retreat entitled “Awakening the warrior heart”. I had been invited by a friend, and signed up without really knowing what I was in for. Fairly confident that anything to do with warriors and matters of the heart would be good for me, I was also convinced by the promise that the two day workshop would follow Joanna Macy’s deep ecology work. The approach seems to be about providing nourishment for activists and those doing any type of 'work of the heart'.

In the aid sector, where I work, the most common reaction to hearing what I do is “oh, that must be so rewarding”. People are correct in that it’s definitely work of the heart. I'm regularly blown away by the passion and commitment of people I work with. When a highlands man stands up to share with the group that he is dedicating his time to challenging harmful cultural practices within his church, or when the visiting facilitator from Solomon Islands expresses how impressed she is with the progress in PNG, or an exciting new idea is formed during a casual cuppa with a colleague it feels as if we do the most important and rewarding work in the world.

Yet, the day to day reality is far less glamorous or gratifying. We spend most of our office time engaged in very bureaucratic and mundane tasks like arranging flights, developing participatory workshop schedules, writing seemingly endless reports, preparing funding proposals and checking progress against the indicators we set for ourselves. When in the field, we’re sitting in over-air-conditioned workshops, seeking appropriate consent for photographs, bumping along on the floor of a fibreglass dinghy, sending off reporting data while using sporadic internet connections or attempting to carry on serious conversations with government donors while wearing flip flops and sweating like a pig. The long days, lonely nights, and inevitable security, travel or medical misadventure mean that there are high rates of burnout in the aid sector.

So, something is definitely needed to rejuvenate the soul. During the two days of yoga, movement, meditation and creativity we were served nourishing, homemade vegan food, which enabled each of us to focus on pausing, re-setting and reconnecting with spirit. But perhaps more importantly, I learnt a couple more tools for taking care of myself and reflecting on day to day difficulties.

Our first day began with yoga, including quite a few warrior poses (which i really should have anticipated). It was a little more strenuous than I’m used to, and afterwards, during shivasana (lying quietly on our backs) I began to feel a strong sensation of tightness in my chest. When I mentioned this to the teacher, wondering in my usual hypocondriac way if I was perhaps heading for a heart attack, she calmly and lovingly suggested it might more likely be unrecognised grief popping up unannounced.


A Joanna Macy meditation exercise invited us to each consider the aspect of nature that we most identify with. Some chose a physical thing like a tree, or drop of water. I identified strongly with a particular place in the world where I feel connected to nature and all beings. We also shared about our hopes and fears for the world, and I discovered that my fears were to do with our broken sense of community as well as environmental destruction and my hopes were about building a more peaceful and equitable world. After our final yoga class of the day I tentatively ventured back into the real world, aware that we'd created a small but special community in the backstreets of Newtown.


That night I was given a ticket to see Bob Dylan in concert. in some ways the activity took me out of the “vibe” of the retreat, and it felt wierd to be suddenly seated behind a couple of yobbos who were forever getting up for the toilet, yelling requests and generally disrupting the night for the rest of us. But the music was great, and towards the end I found myself singing along happily to an updated version of “Blowin’ in the wind”. It occurred to me that the sense of grief over the futility of war, the cruelty inflicted upon refugees, and the injustice of oppressive regimes has not waned since the song was written. My own grief is even stronger when I think of my nephew and (soon-to-be) niece, and the broken world that awaits them.


Our homework after the first day was to find a natural space to be in, and create a monument to our grief. Waking up the next day, I had a panicking feeling that I had run out of time to complete the task, and also that I didn't know how to create a physical expression of my grief, or even how to describe it. But walking through a park on the way to class on Day 2, I found myself reaching for the makings of a nest. As much as the nest represents grief about my own childhood and childlessness, and about the fragile world we live in, it is also a symbol of hope and of the nurturing aspects of work of the heart. I remember when two birds built a nest and eventually raised baby birds in the balcony of a house where I lived. The parents were so attentive and focused, and so distressed when one of the birds got accidentally caught in the attic. Perhaps my nest represents a commitment to keep working just as attentively for a better world for the next generation, one where the answer to all Bob Dylan's questions is more emphatic than futile; canonballs are forever banned, all people are free, no more unnecessary deaths, and nobody turns their head away pretending they just don't see. 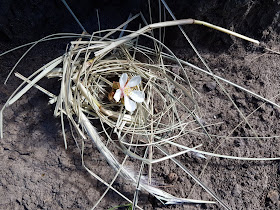 During the morning’s meditation exercise we were invited to find a partner and look into one another’s eyes for several minutes. It was very intimate, and my partner and I felt as if we were falling in love a little bit with one another as we gazed into the windows to our souls. It’s very difficult to look into another person's eyes and not feel love, compassion and understanding. I wondered what the world would be like if we all took more time to really look at one another. I've been thinking about the ways that I get so caught up in my own grievances and petty concerns that I forget to look really deeply at the other person, and consider what might be going on for them.

Just the other day, I was given the opportunity to test this thinking. On the 418 bus, I've found myself seated a couple of times next to a slightly scary, elderly man. Each time I've made those moves to ask him to let me out for my stop he has raised his hand, and instructed me to wait. So taken aback by his prickly manner, I sat there sullenly, feeling like a child told off by the Principal. But, as I followed him off the bus (he was getting off at the same stop as it turned out) I saw a sadness in the way he held himself. I suddenly realised that he was just like me on one of my angrier days. And it can be annoying when people want to get up way before the stop and you're getting out yourself anyway.


After morning yoga and meditation, we were given the opportunity to use coloured pencils to express the support networks that we draw upon in our heart work. I found myself pulling out my travel watercolour set for this activity. The brush moved between green spaces, bodies of water, yoga practice and a telephone, because connecting with close friends is such a source of strength and support for me. When I was caught in a boating mishap a few weeks later, I contacted a close friend immediately after it happened, and was rejuvenated enough by that connection to continue with the tasks at hand - drying clothes and encouraging others to see the funnier side of our misadventure.


The final session was a spirited dancing time. Blindfolded in the hope of minimising our self consciousness, we each found our groove, moving to speedy tempos and to slower, more lilting rhythms. As adults, we've largely forgotten how to dance like nobody is watching, and yet it's such a freeing thing to do. In fact, one of our group has planned her birthday party at 'no lights, no lycra', which operates on a very similar principle. Finally we were also shown a couple of power poses, which are supposed to not only make us feel stronger, but have been found to reduce anxiety as well. After standing for 2 minutes with my arms up in the air, I did feel a little bit more like the warrior that I tell myself I am.


Not quite ready to return to the real world, we all lingered afterwards in the courtyard with cups of herbal tea in our hands, the monuments to our grief in our pockets or backpacks, and our brave hearts on our sleeves. Now each of us has another circle of support and encouragement for our various works of the heart.
Aletia at 2:41 pm
Share